As a popular drug among people who go clubbing, there’s some confusion about is ecstasy addicting. Some people don’t believe that 3,4-methylenedioxyamphetamine (MDMA), the active chemical, is addictive. However, users can develop the same problems as those with other drug addictions. Learning more about ecstasy and current research on the issue could clear up this question. 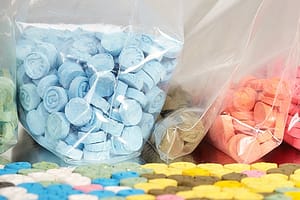 The drug ecstasy is actually a designer tablet or pill form of MDMA. The crystal-like or powder form of MDMA is called Molly. As a synthetic drug, the government classifies ecstasy as an illegal stimulant with hallucinogenic effects.

Although ecstasy contains MDMA, makers often mix other substances with it, including cocaine, heroin and rat poisoning. For that reason, it’s hard to find pure MDMA. Either way, the drug has a high potential for abuse and has no accepted medical purpose.

What Are the Side Effects and Dangers?

People who use or abuse ecstasy do so because it promotes friendliness, happiness and a feeling of well-being. It also enhances the senses of sight, smell, sound, and touch. Its other effects include relaxation, empathy, lowered inhibitions and increased energy. When these effects wear off a few hours later, the crash that follows can last for days.

Also, ecstasy interferes with the pleasure center and dopamine levels in the brain. These effects are similar to those of opioids such as heroin and prescription drugs.

However, some ecstasy doesn’t even contain MDMA. It contains paramethoxyamphetamine (PMA) instead. While the feelings that PMA promotes are similar to MDMA, they last longer. It also doesn’t take as much PMA to achieve these feelings, which leaves many people at risk for overdose.

An ecstasy overdose is very dangerous. It causes symptoms such as high body temperature, foaming at the mouth and seizures. These issues can worsen an underlying heart condition or cause heatstroke, both of which can be fatal.

According to the National Institute on Drug Abuse, there’s insufficient evidence that MDMA is addictive. However, animal experiments show that the animals self-administer the substance, which is an addictive behavior. The degree of self-administration is also less than other addictive drugs.

Furthermore, there’s even less evidence about is ecstasy addicting. Part of the problem is that this form doesn’t have a standard chemical composition. Getting the tablets or pills from different dealers means that the ingredients vary, so the effects also vary. For instance, ecstasy that contains rat poisoning is less likely to cause addiction than ecstasy containing cocaine.

Treatment for Ecstasy Use Problems

The first step toward recovering from an ecstasy use disorder is to get detox. Serenity House Detox & Recovery can provide the ecstasy addiction treatment program that you need. We also offer many other detox programs and services such as:

Don’t let your lack of knowledge about is ecstasy addicting keep you from getting treatment. Find the care that you need at Serenity House Detox & Recovery. Call us at 866-294-5306 to get started opn your recovery.