In an effort to put the brakes on drugged driving, police forces across the United Kingdom will begin rolling out “drugalysers” and field drug test kits to catch drivers under the influence. 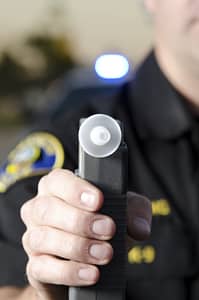 The “drugalysers” are small devices similar to breathalyzers, devices which test for the presence of alcohol in the blood and are common in many police forces around the world. Test kits will also be employed to check saliva for drugs such as marijuana, methamphetamine, ketamine, ecstasy and prescription opiates.

UK drivers shown to have any amount of these or other drugs in their systems can be arrested. Even if they don’t test positive with a roadside test, they can be taken into custody and retested with more advanced equipment at the police station.

These efforts will be part of a new zero-tolerance policy for driving while on drugs. Drugged driving is responsible for a number of automobile accidents every year, and yet the subject seems to get less press coverage than drunk driving. One study from the Office of National Drug Control Policy found that approximately one third of drivers in fatal car accidents in America had drugs in their system.

While breathalyzers that test blood alcohol content are relatively accurate and easy to use in the field, the same has not been the case for drug testing equipment. In the past, drug testing in the field has required a phlebotomist to be present to take a blood sample which would then be analyzed in a lab. Field-level testing allows police officers to take potentially dangerous drivers off the road with more legal certainty.

Drugalysers have not yet been implemented in the United States. In fact, there is a debate in the US (which has risen greatly since the legalization of marijuana in certain states) about whether it’s even possible to reliably test for drugs in drivers’ systems. THC, the active ingredient in marijuana, can be found in the blood of people who haven’t smoked for a day or two.

In the midst of this debate, surveys have shown that some drivers don’t believe driving high qualifies as Driving Under the Influence or Driving While Impaired. Law enforcement, however, remains clear on the matter.

Drivers in the US who are believed to be impaired will be arrested and administered a blood or urine test. If they are found to have drugs in their systems, they will most likely be convicted of Driving While Impaired or another related crime.

Don’t be a Dangerous Driver, Get Treatment

Driving while high is simply not safe. While a perfect system hasn’t yet been established for detecting and prosecuting drugged drivers, that doesn’t mean the activity is safe. You could face serious legal trouble, or worse yet, cause a fatal accident.

If you can’t control your drug use and get behind the wheel while high, it may be time to get professional help. Serenity House Detox & Recovery can help you get your drugged driving, your drug use, and your life, under control.