Will a Addiction Vaccine Really Work as Heroin Treatment?

Each flu season, many people go to their doctors or local pharmacies to get their flu shots. In the future, people will be able to do the same thing, but with an extra option. Instead of being vaccinated against the flu, they will have the option to be vaccinated against heroin addiction maybe instead of going through heroin treatment.

New drugs are currently being tested on rats that prevent the psychoactive functions of heroin in the brain. 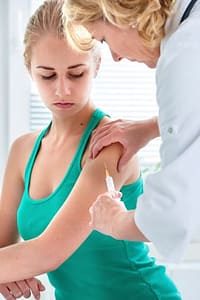 This drug could potentially prevent hundreds or thousands of overdose deaths from heroin. However, this isn’t the first time a drug addiction vaccine has been proposed. Cocaine and nicotine vaccines have also been created, but neither drug was ultimately successful in human trials.

Nina Volkow, Director of the National Institute on Drug Abuse (NIDA), the federally funded drug abuse research institute, says the organization is hoping to move to human trials as soon as possible.

“Until we go into human trials, we will not know if they will work,” she said. “They work great in rats. They stop taking the drug, they don’t feel bad about it, and the drug is not getting into the brain.”

Vaccine Could Save Thousands of Lives from Heroin OD

The drugs work by creating antibodies that target and break down heroin before it bonds with receptors in the brain. Without this bonding, the drug can’t cause addiction. Heroin treatment as we know it would also change. So far the current vaccine has been successful at keeping rats from becoming addicted to heroin, but researchers don’t know if it will scale up to humans.

Heroin addiction has taken a massive toll in the United States, especially in recent years. Overdose deaths caused by heroin have skyrocketed, and the drug is taking lives across all demographics.

Nearly every time a new drug is introduced to the market to treat addiction, there is a hesitant, but optimistic response from the treatment industry. While a heroin vaccine can prevent heroin abuse, there are many other drugs that people can turn to if they think substance abuse will solve their problems.

The drug naloxone has had a successful track record of treating alcohol abuse. However, without other forms of treatment that focus on the behaviors associated with alcoholism, many people simply stop taking the drug and return to their past behaviors.

Comprehensive addiction medicine addresses the multiple aspects that lead to addiction. Using the best medications available to treat addiction is just one part of the equation. Serenity House Detox & Recovery balances the many aspects of treatment that lead to a successful recovery. Call us today to verify your health insurance coverage and hear about our personalized treatment plans.

Exercise Addiction: Replacing One Addiction with Another
March 5, 2022