Symptoms of Addiction to Alcohol

Alcohol is the most used substance in the world. Just about anywhere you go you can drink alcohol legally as long as you’re a certain age. Since alcohol is so accessible around the globe, looking for symptoms of addiction isn’t always easy. This not only makes it difficult for friends and family to know when a person has a problem, but the person who may have a problem doesn’t always see it either. The disease of addiction alters a part of the brain that’s responsible for self-awareness, so when a person is beginning to show signs of alcoholism, they don’t even realize it. There are some signs that a person is developing alcoholism, so it’s important to know what they are.

Why the Symptoms of Addiction to Alcohol are Hard to Spot

In the United States, the legal drinking age is 21, but many people experiment with alcohol at a much younger age. No matter how many drug and alcohol diversion courses schools and communities offer, most people are going to try alcohol between the ages of 14 and 18. Many would say this is completely normal, and it often is because most people don’t develop a problem. Then, you have a person in their 20s, which is stereotypically known as party days. And again, drinking in this demographic is often looked at as completely normal. As an adult, it’s not uncommon for a person to go out after work with friends for a drink, drink when they get home to unwind or have some drinks on the weekend. So how do you spot the symptoms of addiction? 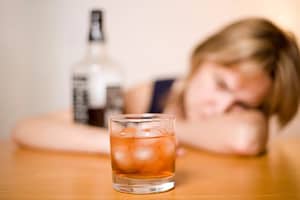 Addiction is a progressive illness, so being able to spot the early signs of alcoholism is the best thing to curtail the disease. Sometimes the signs are very subtle, but they’re clear. Before developing full-on alcoholism, a person may become a very heavy drinker.

A heavy drinker is someone who is drinking in excess on a consistent basis or someone who is starting to see the consequences of their drinking worsen. The person may begin having problems with friends or family, issues at work, legal troubles or health issues. At this point though, a person still may be able to stop. Although something bad doesn’t happen every time the person drinks, it’s important to recognize that each negative issue in the person’s life is usually the result of drinking.

There’s a certain point in a person’s drinking where an invisible line is crossed and a person has lost control of their drinking. Once they take the first drink, they’re unable to limit the amount of drinks they have. Since alcohol is so widely used, many people are obsessed with the idea that they can somehow control their drinking. But countless attempts prove otherwise. Here are some questions one can ask themselves to see if they’re developing alcoholism:

Getting Help for Alcoholism

Another one of the major symptoms of addiction to alcohol is a physical dependence. If you’ve started to experience symptoms of withdrawal when you’re not drinking, it’s time to get help. Serenity House Detox & Recovery can help you with the detoxification process and we’re here to show you that there’s a better way of living. We’ll be there to support you during alcohol detox and rehab for your recovery. We will provide you with resources to regain control of your life. If you’re ready to make a change call 866-294-5306.